The Treaty of Versailles not only put an official end to World War I. The international conference was also a major media event that attracted a huge amount of publicity. Edward Jackson and Victor Kubes, two American cameramen from the U.S. Signal Corps, on this historical occasion scooped all journalists when in May 1919 they captured the four leading statesmen from France, Italy, Britain and the U.S.A. for an exclusive photo and film opportunity.

Film history traditionally refers to cinematographer and movie director Victor Fleming as President Wilson's official cameraman on his first trip to Europe, when Wilson was working on cementing his ideal about a League of Nations for generations to come. Fleming's role is well documented in Michael Sragow's study on Fleming's work during World War I. But who remembers the story on the two cameramen who after Fleming's discharge from the U.S. Signal Corps in March 1919 took up where he had left off? They would be responsible for some of the most iconic pictures that have been taken of the Treaty of Versailles and of the politicians who played a leading role at this historical conference.

The first man who needs to be credited here is "Eddie" Jackson. Born in Philadelphia in 1885, Jackson's photographs included seven U.S. Presidents, as many kings, one pope, three queens, ten thousand beautiful women, three hundred murderers, most of the world's great diplomats and generals, pickpockets, gunmen, drug peddlers and their victims. We mentioned Jackson briefly in our book American Cinematographer in the Great War because he worked together with Wilbur H. Durborough who had filmed in wartime Germany in 1915. Durborough reportedly qualified Jackson as one of the most agressive press photographers in the United States. As will be shown when he covered Versailles, Jackson was out to get the best pictures and he wasn't the type to let himself be disappointed by anyone. He had learnt his trade in the streets of New York City where he would stalk his newsworthy subjects all over town. From 1912 Jackson was a freelancer for the American Press Association.

Jackson was with Durborough when they worked together for the U.S. Signal Corps in Washington state at Fort Lewis. According to the Seattle Daily Times of January 6, 1918, films and still photographs were made of the soldiers training for war, including a sham battle that was staged for their camera. Although Durborough doesn't mention him in his manuscript, located in the Manuscripts division of the Library of Congress, contemporary press reports (reproduced in Joseph Caro's book on Jackson) indicate Jackson worked as a still photographer, while Durborough appears to have cranked the movie camera, filming scenes how Fort Lewis would be defended if attacked. While on the West Coast Jackson and Durborough also made some Seattle area shipyard films. Here is a press report on their joint work filming the American naval program:

Somewhat later, in March 1918, Durborough and Jackson worked together on producing aerial pictures at Camp Kearny in San Diego. These were all photographic assignments for the Committee on Public Information (CPI), America's wartime propaganda agency. In August 1918 Jackson was transferred to Europe to cover the war with the 27th Division. Not much is known about the personal background of Jackson's colleague, cinematographer Victor Kubes, except that he was a press photographer from New York. He started working for the Hearst newspapers. Moving Picture World in an article published on March 18, 1916, refers to him as a newsreel cameraman for the Hearst-Vitagraph News Pictorial, working in the Chicago area. Kubes was later transferred to Cleveland, Ohio, and when war broke out between America and Germany he joined the U.S. Signal Corps. Kubes is also listed as a staff member of the Students Army Training Corps of Columbia University in 1918. Columbia University from January 1918 hosted a training school for land photography for the Signal Corps, so he probably taught photography there. Unlike Jackson, who followed the retreating German army in the final months of the war, Kubes had no frontline experience. He was shipped to Europe in December 1918 on the SS George Washington to cover President Wilson's visit to Europe. Kubes probably worked with Victor Fleming on his first pictorial assignments in and around Paris in early 1919.

Jackson states he was assigned as the official American Expeditionary Force photographer to Woodrow Wilson's Presidential Party overseas and the Peace Conference at the close of the war. His own story can be read in this weblog in more detail. Although it overlaps with Fleming's claim to fame it is evident from the pictures that he took as well as Jackson's own account that he photographed Wilson's party as early as December 1918 when Wilson first landed in Brest, France. Jackson followed the Presidential party on its visit to Paris, Rome and London.

Here is a link to one of Jackson's pictures showing some of his fellow Signal Corps cameramen covering Wilson's visit to Rome.

Jackson's biggest scoop came during Wilson's second trip to Europe in May 1919 when together with Victor Kubes he cunningly "fixed" a photo and film opportunity and captured the four leading statesmen at Versailles: Wilson (USA), Lloyd George (Britain), Orlando (Italy) and Clemenceau (France) who a few weeks before had presented their controversial peace plan, much to Germany's indignation and anger.

In Jackson's own words and as published on December 29, 1922 by the American Legion Weekly, here is how they made these historical pictures: 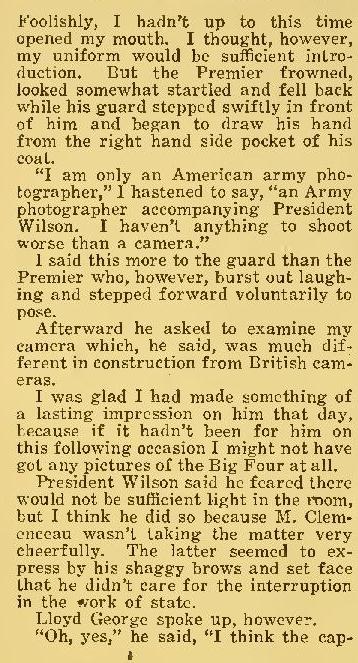 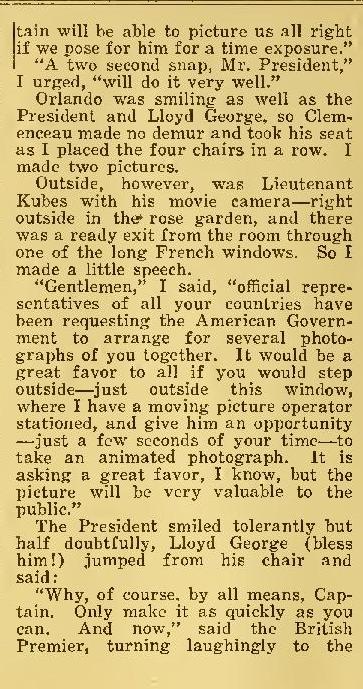 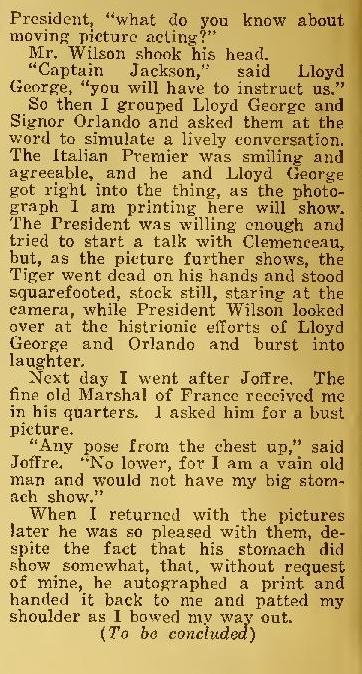 Apart from Jackson's historical photographs, Kubes' film showing the "Big Four" has also been preserved and can be seen online in contemporary newsreel segments which were found by author Cooper C. Graham in the CBS Collection at the National Archives in Washington, NWDNM (M) CBS-CBS-WW1-, National Archives identifier 89349, record number CBS-WW1-229.

The historical scene showing Wilson, Clemenceau, Lloyd George and Orlando finally found its way in Episode 24 of the CBS World War I series, no doubt taken from the original Signal Corps footage shot by Kubes. Here is a short clip:


The two Signal Corps cameramen stayed in France until the conclusion of the peace treaty meetings. Although cameras were strictly forbidden, Kubes and Jackson managed to cover the arrival of the German delegation at Versailles. Jackson claimed he forged a special pass on White House stationary, which enabled him and Kubes to capture this scene:
When on June 28, 1919, in the Hall of Mirrors at Versailles the Peace Treaty was signed, Jackson and Kubes were present again to record the event.

After the Great War

After the Great War Kubes became a newsreel cameraman for Fox News. In November 1919 he went to Soviet Russia for Fox and brought back some remarkable motion pictures of Lenin. Jackson's star had also risen as a result of his wartime work for the U.S. Signal Corps. He was promoted to Captain in the Signal Corps. After his return to America, in July 1919, he became the lead news photographer for the New York Daily News and stayed with this newspaper until his retirement, covering events like the first flights across the Atlantic and the Depression in the 1930s. Jackson died in Wilton, Connecticut, in 1967.

For more information on Jackson's remarkable life and career here is a link to a biographical website by Joseph J. Caro who has written a series of books on Jackson's photographic work. These are all available on Amazon. Caro's volume on Jackson's experiences during World War I can be ordered here. It is an extraordinary book with many pictures by Jackson, as well as cites from his personal journal that is now in the family archives.

Jackson's story as printed in the American Legion Weekly on his photographic work during the Versailles Peace Treaty conference can be read and downloaded here.

Posted by Ron van Dopperen at 8:30 AM